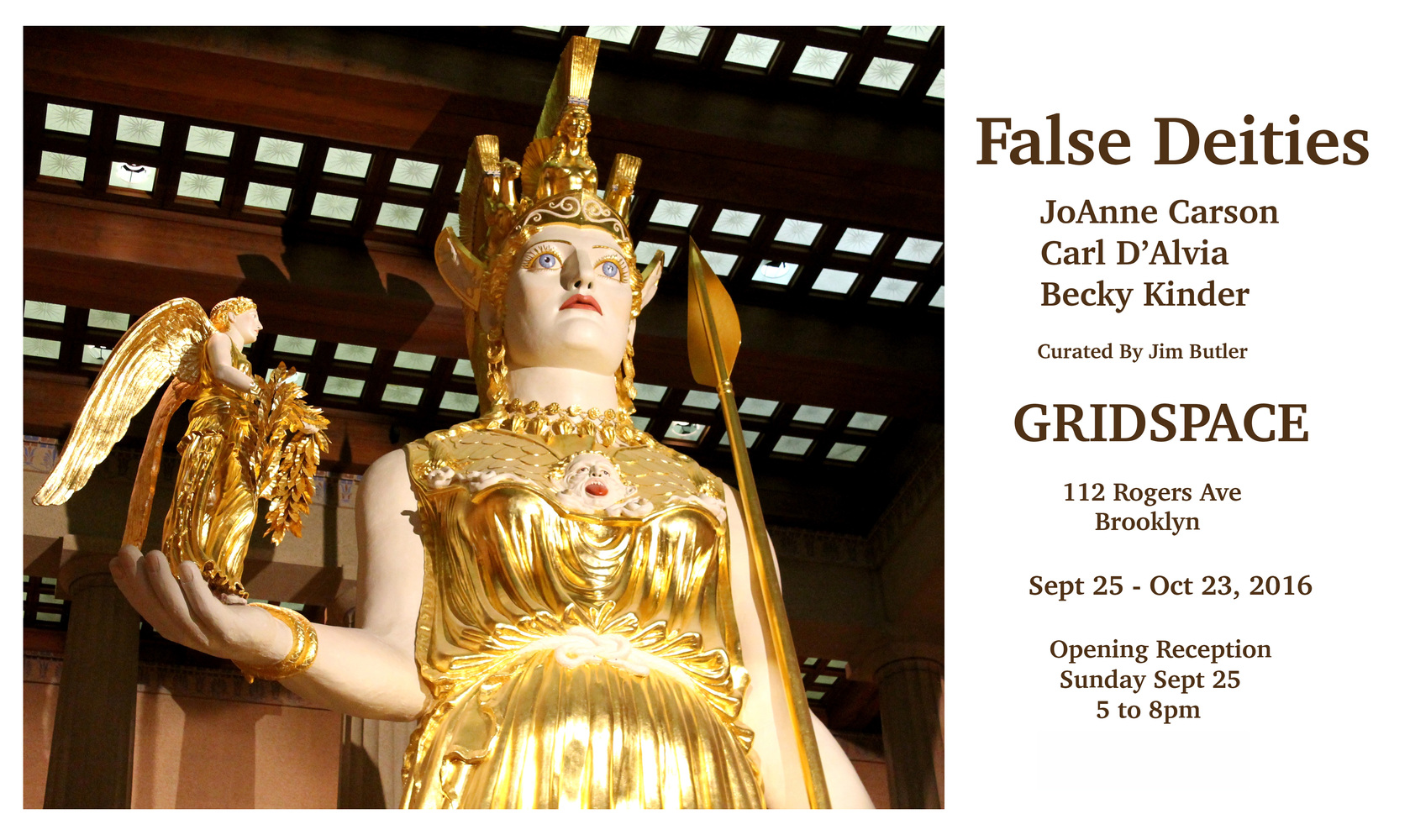 This exhibition presents work of three artists concerned with ideas of supra-human beings.
In our secular culture, God has no fixed address. It is uncommon in contemporary art to attempt delivery of even a postcard. But "False Deities" is not a dead-letter office, instead a show opening complex correspondence with culture's spiritual projections.
These sculptures and paintings image animate, metaphysical beings at the crossroads of our past and present ideas of gods. None posits a truth ... and in that sense are false to conventional belief systems. Yet their very fiction sharpens our sense of what humanity might have known, perhaps has lost, and could wonder for the future.
The three artists are generationally dispersed. Each works in New York and all are American.
Becky Kinder is a painter who plumbs deep histories of ancient Middle Eastern and Pre-Columbian sacred imagery in her most recent graphic work, large and small. Her painting "Syrian Eye Goddess" is haunting in its mute and stoic frontality. Perhaps related to small sculptures discovered at the ancient city of Tel Brak, it is fundamentally unlike those mysterious talismans. Kinder's enormous totem has been reanimated (reincarnated) by two huge and expressive eyes. Their unblinking gaze seems to reach across millennia: venerated being of a lost world, yet hypnotically present in ours.
Carl D'Alvia is a sculptor making reductive objects parsing fact and fiction; humor and tragedy. His bronze sculpture "Plank" presents a kneeling supplicant, its gesture amplified by a minimalist form sensibility codifying head; torso; legs ... but no arms. Kneeling before divine power is common practice to most religions but D'Alvia�셲 piece gives no clue to specific denomination. Yet its submissive posture is disturbingly familiar, recalling powerless hostages made to kneel before theocracies violent and murderous, past and present. Its sense of personal control, lost to the pitiless, stabs at the heart of our illusions of self-determination.
"Wood Nymph" by JoAnne Carson is a three dimensional painting that melds goddess notions from Druid mythology to the Hindu pantheon, linking them in a surrealist tromp l'oeil tableaux. A life-size wooden woman with eight arms balances spinning pies on the tips of seven fingers, emerging from where her head should be. Sprung from an oak tree, she is undeniably pantheistic, a siren calling to those disenchanted with separation from the natural world. With energy as enchanting as Puck's, her wild juggler's act is also a warning: without a head (mind) the physical world becomes unsustainably reactive. But here, frozen in wood, we can dream about such excess without risk.