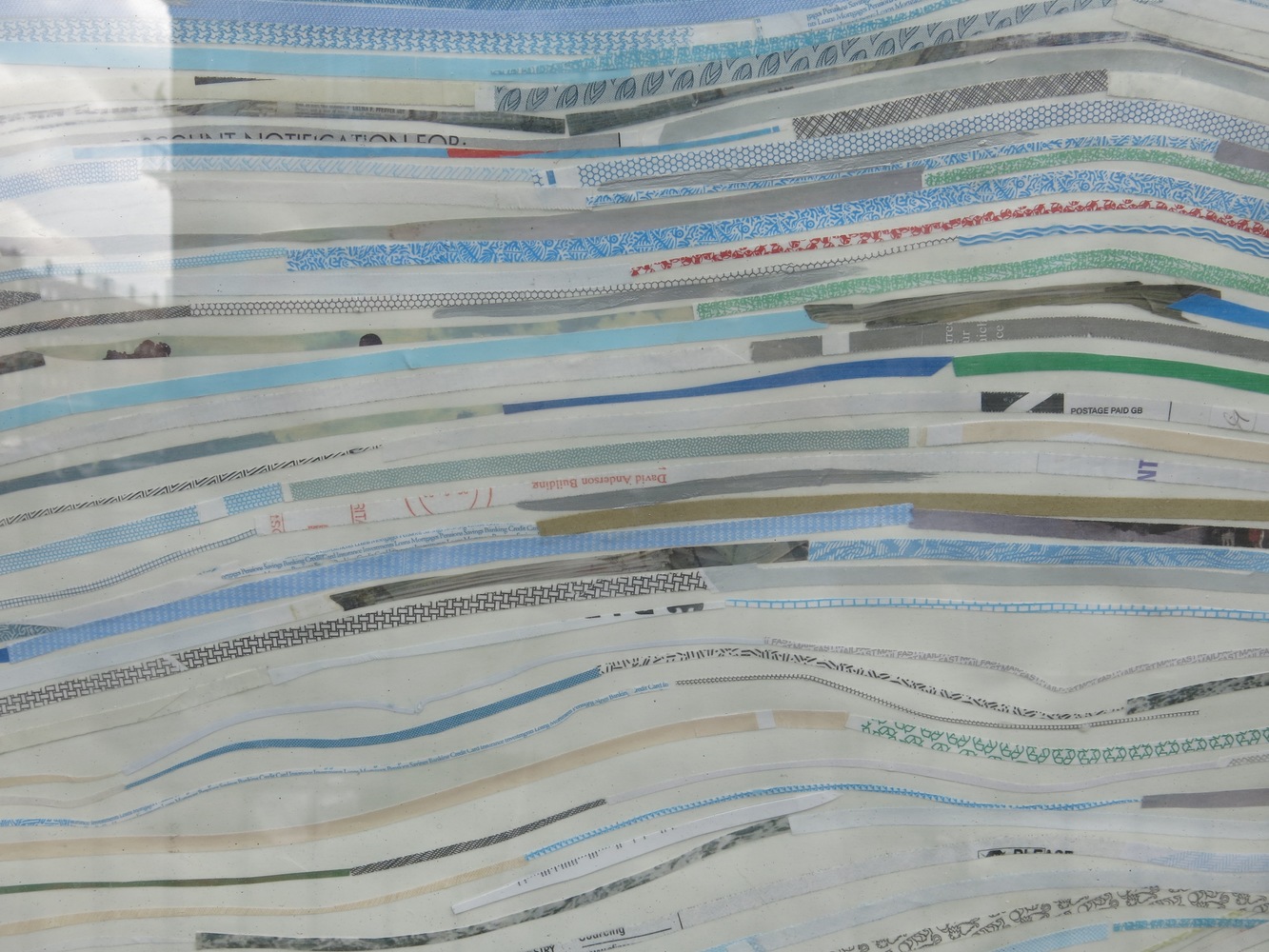 In meteorological terms, a 'waving frontal system' describes "a stationery weather front that sits in a zone of light winds that blow parallel to it, which results in it sitting in the same place for a prolonged period of time. Whilst the waving weather front is stationary, pulses of activity can ripple along it — just like when you lay a skipping rope on a table and flick it at one end, which sends a kink along its length. This is mirrored in the waving weather front." Using the material of recycled security envelopes cut into strips and collaged in multiple, undulating 'stripes' across the paper, 'Waving Frontal System's' title refers to the uncertainty implicit in predicting the weather. The ripples or 'waves' that move across the piece, and interrupt the flow of material exaggerate this. As a site-specific piece, made to fit the window of Gridspace, the title of the work also refers to the confrontational frontality of the storefront and how we encounter the work located there.
Bio
Shona Macdonald has had selected solo shows at Ebersmoore, Chicago, (2012), the Roswell Art Museum, Roswell, NM, (2011), Engine Room, Wellington, New Zealand, (2010), Proof Gallery, Boston, MA (2009), Reeves Contemporary, NY, NY (2008), Den Contemporary, LA, CA, (2007), Skestos-Gabriele, Chicago IL, (2005), Galerie Refugium, Berlin, Germany, (2002), and Fassbender Gallery, Chicago (1998 and 2000). Her work has been reviewed in Art in America, Art News, the LA Times, Chicago Tribune, Chicago Sun Times, Sacramento Bee and New American Paintings. She has been a Visiting Artist at over forty institutions, including Wimbledon College of Art, London, (1998), Georgia State University, Atlanta, (2007), Cornell University (2006), the University of Alberta, and the University of Calgary, Canada, (2002). Shona Macdonald was the recipient of a grant from the Pollock-Krasner Foundation, NY, (2009), a Fellow at Roswell Artist-in-Residence in Roswell, New Mexico, (2010-11), Can Serrat, Barcelona, Spain, (2012), and the Cromarty Arts Trust in Scotland. She is a Professor of Studio Art and Graduate Program Director at the University of Massachusetts Amherst.